Introduction to This Series

When old people start a sentence with “In the good ole days, “, they are about to fondly reminisce about their childhood days (or at least the early part of their lives). Old people call the early part of their lives “the good old days“. We old people invariably remember these good old days as being much better than today. Sometimes this is a trick of our memory because we may fool ourselves into believing this when it isn’t really true.

My God, Teacher Lee! How did you survive such a barbarian childhood in such a savage land!

Well, let me tell you, it wasn’t easy. I’m going to relate to you some fascinating tales of life without today’s technology, tales so fantastic that you may not believe your ears.

TV in the Good Old Days

When I was young, TV signals traveled over the air waves just like radio signals. If you could receive the TV signals where you lived, you got to watch TV for free!

We had one TV in my home. The TV tube, electronics, and speaker were large in size, so the TV usually came in a console cabinet and were called console TVs. There were also portable TVs but they were quite heavy and weren’t really intended to be carried too far. 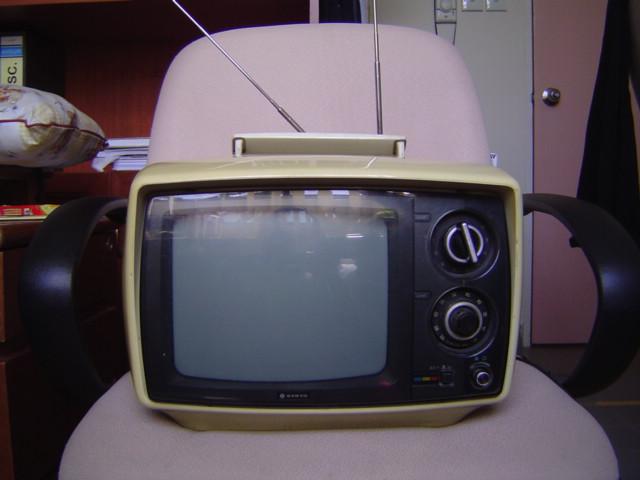 Do you see those round knobs on the front of the TVs. We had NO remote controls back then. To change a channel, you had to stand up, walk over to the TV set, and rotate a knob with your hand (!) until you reached the channel you were looking for. This wasn’t too bad since we only had 12 channels to flip through. Want to change the volume? Yep, get up, go to the TV, and turn the volume knob by hand. Brightness and contrast? Yep, knobs to turn, get up! Need to turn the TV off? Get up! There were no couch potatoes back then, and there were no fights over the remote control because there weren’t any remote controls to fight over.

Below are some typical controls for an old-style TV set. The video picture was in black-and-white only. Yes, there was NO color TV when I was a very young lad. Though color TV was invented in 1953, it was too expensive for anyone to buy, so it wasn’t until the mid-1960s than color TV became easily available and started showing up in people’s homes.

We had two TV channel bands: VHF (very high frequency) and UHF (ultra-high frequency). VHF had Channels 2 through 13 and were considered local channels (TV towers in your local area, close to you). That’s 12 channels TOTAL, and not all of them were necessarily in use. I don’t remember having any UHF channels (channels greater than Channel 13) but my memory could be failing me. These would have been channels whose TV towers were too far away from my house for normal VHF reception.

TV broadcasting service would come on in the morning and go off at around 10:00 pm at night. Yes, that’s right. There was NO late-night TV. After 10:00 pm, you couldn’t watch TV! Each TV channel after 10:00 pm would only show a test pattern that looked something like this:

Since we had NO CABLE TV (i.e., no cables for carrying signals), the TV signals simply traveled over the air, just like radio signals. So the TV picture was often of poor quality with lines and static or snow on the screen. Sometimes you could barely see the picture. To improve signal reception over the air, we had to use a metal antenna. If you could afford it, you could mount an outside antenna on the roof of your house to “capture” these TV signals from the air. If you were too poor to afford a roof antenna, you had to settle for a cheaper type of antenna called “rabbit ears”. A rabbit-ear antenna just sat on top of your TV set. Its signal reception was not as good as a roof-mounted antenna. I wonder why we called this type of antenna “rabbit ears”? 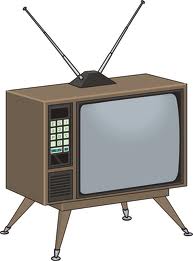 But even with an antenna, you couldn’t necessarily be guaranteed of getting a clear picture. You might have to rotate the antenna to point it in different directions to see which position gave you the best picture. In the case of rabbit ears, you might have to adjust the angle of the rabbit ears in addition to rotating them to improve the picture. If you had an antenna on the roof of your house, what did you do then? Well, you could climb up on the roof to do it…, but if you had enough money, you could get a remote-controlled antenna with a little motor attached to it so you could rotate it remotely from inside the house using an antenna control box.

Sometimes the TV screen would show a double image. We had tuning knobs to fix this, similar to focusing an old-fashioned camera by turning the camera lens ring. Yep, we had NO auto-focus back then on TVs or cameras.

One good thing about the good old days was that we had very few TV shows to watch, so almost all Americans watched the same TV shows. Talk about having something in common to talk about! If you mention “Gilligan’s Island” to any old person today, they will all remember this comedy TV show that played in the good old days because it was one of the few programs available to watch. Today there are so many cable TV channels and so many TV shows and series that come and go that I may never even hear of them, much less see them on TV.

Now, people living in poorer countries than the USA may have had their “good old days” much later than I had mine because the USA often had the best technology much earlier than the rest of the world did back then. What we had in 1950, for example, perhaps India didn’t get until 1970. I don’t know since I wasn’t there (in India).

Today, TV signals are broadcast (sent out) through cables (thick wires), which may be above ground or below ground. We call this type of TV broadcasting Cable TV. Since the signals travel through a wire and not through the air, ugly roof-top antennas are no longer needed. Cable TV reception is excellent, and we now have high-definition (HD) programs for life-like pictures. Unfortunately, we have to pay for Cable TV, and it is too expensive for my taste (for me). There are hundreds of TV channels to choose from, with thousands of TV programs and movies available on a daily basis. TV programs and shows are available 24 hours a day, 7 days a week, 365 days a year, anytime!

TVs today are all flat screens no thicker than a college textbook. They typically have very large screens and are operated by hand-held remote control devices (remote controls), so you never have to get up off the couch to change channels. You never have to tune or adjust the picture. The image is always “picture perfect”.

So TV is a lot better today but it is a lot more expensive, and we have too many couch potatoes who get too little physical activity.

Select the correct answer for each question.

Students, (especially you old folks), what do you remember about the good old days of TV?